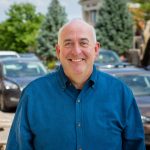 I grew up in the nearby Hockley Valley, moving to Orangeville proper in 1992. Educated at the University of Waterloo where in 1986 I met my future wife Donna. We have four amazing kids, Michael, Patrick, Thomas and Kathleen. I’ve been in business for myself most of my life, following in the footsteps of my father. I run an asset management company, which owns and oversees property throughout Orangeville. I enjoy spending time with my family and in the winter months can be found most weekends at a hockey arena or in the summer at the soccer fields.

My father Stewart Williams served on nearby Adjala council for many years, allowing me an ‘inside’ view of how councils work long before I was elected.

My mom is a senior who lives in Orangeville, making me familiar with the needs of seniors. My eldest son is special needs, which gives me a unique perspective on what families with special needs members have to deal with on a daily basis.

I’ve served on dozens of committees over the years, chairing many of them. I helped to bring back Crime Stopper’s to Dufferin County and helped build Orangeville’s ‘Communities in Bloom’. I served on the board of directors for Orangeville Hydro for several years and I’m president of ORDC, Orangeville’s 54km railway. As mayor, I represent our town at the County level as a councillor for the County of Dufferin. As chair of the Orangeville Police Service Board I oversaw the transition away from the former adversarial relationship with the Police Association into one where we work together to build the best Police service in the province.

As former chair of Orangeville’s trail committee, I supported needed expansion with access to 6.6kms of Island Lake trails and over 1,000 metres of new trail within Orangeville. 2 vital bridge links were also completed. Amelia to ODSS and Victor Large area to Maywood park. I’m especially proud of Orangeville’s adoption of a 5 year future budget plan, a first in the county of Dufferin and something I have pushed for since the last election. Our budget planning is now following a five year plan with no growth after inflation and assessment, providing residents with stability and a no-surprises budgeting process. Unfortunately recent council votes have pushed the budget above this level. Something I voted against. Orangeville’s finances have been strengthened under my watch, with a growth of our reserves and the elimination of decades of accumulated deficits.

But more than anything, I’m committed to rolling up my sleeves and working hard to make Orangeville better and keeping taxes under control. That means being here and putting in the hours. I’ve been here full time for our citizens since the first day I took the oath of office in 2010 as councillor. With your continued support, I’ll continue doing the work that needs doing to be your mayor.