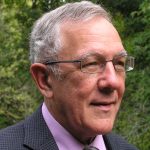 • Fred was born in Ontario and raised in British Columbia. He moved back to Ontario in 1958. He has an MA in economics from York University. He and his wife, Franca De Angelis, have lived in Mono for 44 years.

• Fred is a retired transportation consultant — – having worked in every province in Canada and widely throughout the United States. In 2005 in spent a year working in China after which he retired. Since retiring he has taken on projects in Africa (Tanzania, Mozambique and South Africa) and the Middle East (Jordan). His last project, for the World Bank, was in Nepal in 2016. For most of his career, he was either self-employed or a partner in small consulting companies. He interrupted his consulting work for two years when he accepted a research position at the University of Toronto.

• For 28 years, Fred has been appointed by Mono Council as its representative on the Board of the Nottawasaga Valley Conservation Authority (NVCA). He has served for three years as the Chair of the NVCA. He has a strong interest in the work of the NVCA, believing that only it, in partnership with the 18 municipalities in the watershed, can ensure that development occurs in an environmentally sustainable fashion.

• Fred is an active member of the Bruce Trail Conservancy (BTC). ), spending considerable time doing trail maintenance in the Mono section of the trail. In 2010 he was the co-winner of the BTC’s “volunteer of the year” award. Fred and Franca are currently the trail captain of one section of the trail in the Hockley Valley and Fred is the land steward of a property owned by the BTC. Fred and Franca are undertaking their fourth hike of the entire trail, 900 kilometres from Queenston Heights to Tobermory.

• Fred and Franca are also long-time members of Mono-Nordic Ski Club and, for the last 15 years they have been volunteers with the Club’s Elementary School Program which sees several thousand student visits every winter. They are also coaches in the Jack Rabbit program on Sundays.

• Fred was first elected to Mono Council in 2010 and has worked hard in two terms of office to keep Mono as a desirable place to live. For eight years Council has appointed him to the Recreation Advisory Committee, the Shelburne & District Fire Board and the Orangeville Fire Service Advisory Committee. He has also sat on a number of ad hoc committees. He is the co-founder of the Mono Headwater Streams Committee which works at improving stream health in Mono.