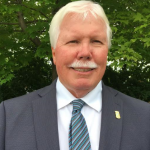 Don was born in Orangeville growing up on the family farm near Mono Mills.
He has a son Mark, a daughter in law Alexandra and two grandson’s Seth and Liam.
His primary schooling was in Adjala attending SS#1 Conner School followed by attending ODSS in Orangeville.
With an over 36 year career at Chrysler Canada and retiring in December 2008.
He returned to ODSS to complete his Grade 12, Graduating in June 2012.
He has served on many Committees and Boards in Orangeville, coached Hockey and Baseball.
Don was chosen to be a representative of Chrysler Canada for Peel Region United Way.
Don attended Orangeville Council Meetings for 9 years, missing only 3 in that time span.
In 2014 he successfully competed for a seat as a Councilor in Orangeville.
That was his first attempt at getting elected to council and the voters of Orangeville awarded him a seat.