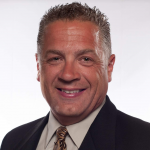 Dan was born in June of 1967 in Caledon East. He has lived in Dufferin County for most of his life, eventually settling in Shelburne with his wife and young children in 2012. They chose Shelburne as the place where they would grow their roots and be close to their family who own a farm in Amaranth.

Dan retired from Honda of Canada Mfg. in May of this year after a very successful 30-year career. Starting at the age of 20, he climbed the ladder from assembler, to quality control, team leader, production coordinator and eventually to leading projects that standardized plants throughout North America. He would bring project management and a wide berth of leader training to the position of Deputy Mayor, including skills in effective listening, leadership for supervisors, analytical problem solving, and statistical process control. He recently started a small business in town and is enjoying the opportunity to have even more time to be local and be involved in the community. Dan lives, works and is involved in our community.

knows his volunteer efforts have greatly benefited by his role as Councilor when it comes to getting things done over the last four years and if elected for Deputy Mayor he knows he can have an even greater impact.

Dan has been a Councilor for Shelburne for the past term. During this time, council has worked on traffic safety, growth, upgrading infrastructure (sewage, water and roads), transit, town services, creating and updating bylaws, addressing public concerns, and ensuring developers are taking into consideration the effects on the town of not only the aging population but also our new residents. He prides himself in always being available when citizens want to talk or have concerns or just want to give input. You will often see him around the town, or at someone’s property so that he can see a problem for himself before it is brought before council.

During his time on Council he has been on the Centre Dufferin Recreation Complex (CDRC) board and personally chaired several committees including, Street Festival committee, Hometown Hero committee, Canada Day Committee, and Fiddle Parade committee.

During his last campaign Dan promised to better utilize Fiddle Park by creating a new winter festival and relocating Canada Day there. Shelbrrr Fest was born! Enjoyed by Shelburne families in the heart of winter, Shelbrrr Fest has proven to be a great success. By moving Canada Day celebrations to Fiddle Park, both attendance and activities have swelled. In an effort to provide family activities in town Dan, along with Mayor

Bennington committed to continuing the Easter Extravaganza when no one else would.

Dan hopes for your vote so that he can continue to serve our community with integrity and transparency.