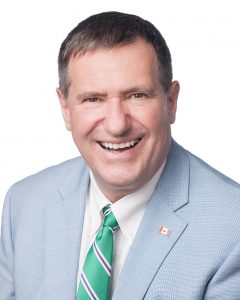 Stefan’s family immigrated from Germany in 1993. Here, he became entrepreneur: Manufacturing consumer goods, then an Orangeville-based solar company under the auspices of the former Ontario FIT Program and finally his Guelph-based marketing agency shared with two partners. Like Stefan, his company is very “open and inclusive” oriented, being a B-Corp (enshrined respect for the environment, employees, community) with an ESOP (employee stock ownership). He was treasurer of the Orangeville BIA, chairman of the Guelph Chamber of Commerce and is currently treasurer of the Career Education Council of Guelph-Wellington-Dufferin. His daughter Laura Campbell is well known as Green Candidate during the 2018 Provincial election and owner of a restaurant in Orangeville, which Stefan’s wife founded. Laura has two young children that are Stefan’s motivation to run for this office. He wants to put all efforts of the rest of his life to save their planet. His younger daughter Anna owns an artist collaborative business in Toronto. In his youth, Stefan was editor-in-chief of Germany’s largest political student newspaper and leader with the CDU, the party of Germany’s chancellor Angela Merkel. In his early professional years, he worked in Germany, France and Michigan after an education in banking and business administration. His spare time is dedicated to tinkering with his vintage car and bikes. He confirms that these machines are fully recycled and saved from a landfill.